Who is pope Leo III

In 800, his decision to crown Charlemagne created the most confusing political entity in Europe that lasted for about a millennia. The Holy Roman Empire owed its existence to Charlemagne and the man who crowned him Roman Emperor – Pope Leo III, but who was Pope Leo III? 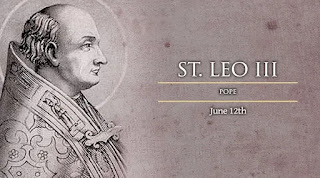 Pope Leo was the son of Atyuppius and Elizabeth. He grew up in Rome, but lacked a noble background and even Roman ancestry, possibly having a Greek or Arab origins. His background then caused irritation to the Roman elite contributing to the opposition to his papacy.

He joined the clergy and earned a reputation as a talented administrator. His rise brought him to the post of Vestiarius or Papal Treasurer. Along with his appointment to important administrative positions, he also garnered ranks and titles becoming a Cardinal Priest for Santa Susanna.

On December 25, 795, Pope Adrian I passed away resulting in a conclave to elect a new Bishop of Rome. The 795 Conclave only lasted a day where Leo emerged as the new Pope Leo III.

On December 26, 795, Pope Leo III’s pontificate began, and under his leadership, the Papacy fostered closer ties to the most powerful warlord in Europe – the Frankish King Charles or Charlemagne. From a rebellion that threatened his eyes and tongue, Leo walked a path that created Europe’s most confusing political entity and title, paved the way to a great divide in Christianity, and forged a love-hate relationship between Popes and Kings.

Pope Leo III understood his precarious situation. Despite winning the papacy, he knew the Roman elites, who looked down on his humble and non-Roman roots, plotting against him. He used for his advantage the warming ties between the Papacy and the greatest military juggernaut in Western Europe that of Charlemagne and the Frankish Empire – an empire covering much of modern-day France, Germany, Low Countries, Central Europe, and Northern Italy. The relation began with the rise of King Pepin the Short who ended the reigns of the Merovingian Kings with Papal support. This further strengthened when King Pepin made a handsome donation of lands in Central Italy to the Pope – lands that became known as the Papal State.

With Leo’s ascension as the successor of St. Peter, he made symbolic strides towards Charlemagne. He wrote to the Frankish leader affirming Roman loyalty towards him and sent along with the Keys of St. Peter and the standard of the city of Rome. Moreover, he requested Charlemagne to send an envoy, which the Frankish leader did in form of Angilbert, to go to Rome and personally received the fealty of the Romans. The act came both as a sign of submission, but also as a reminder to Charlemagne of his obligation to protect Rome and the Papacy. Such a reminder of protection went useful in 799. 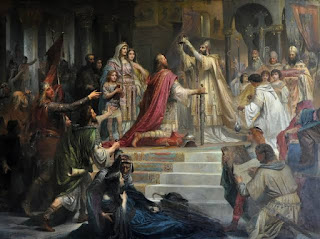 Towards the 4th year of his pontificate, on April 25, 799, Leo faced an uprising that almost sent him to St. Peter himself. He faced the wrath of disgruntled Roman nobles led by the late Pope Adrian’s nephew Paschal, who amidst the procession in celebration of the Greater Litanies, attacked him near the Flamian Gate and the St. Laurence Church. Leo’s opponents charged him with abuse of power and corruption motivating an uprising that threatened the life of the Pope. The Liber Pontificalis described the onslaught:

“Without mercy, they cut his clothes off him and attempted cruelly to pluck out his eyes and totally blind him. They cut off his tongue and left him, or so they thought, blind and dumb in the middle of the street”

The attack aimed to make Leo physically unfit to hold the position of Pope. Pitifully lying in the ground, bleeding and wounded, Pope’s Leo attackers dragged him to be imprisoned in the Monastery of St. Erasmus. Despite the brutal attack he miraculously restored his vision and voice. With the help of a chamberlain named Albinus, the Pope escaped his captors and sought refuge from his ally Duke Winishi of Spoleto. From there he fled north and towards the protection of the Charlemagne in Paderborn. After much discussion, Charlemagne decided to support Leo and ordered a contingent of soldiers, nobles, and archbishops to escort him back to Rome. The contingent included the Archbishops of Cologne, Hidebald, Archbishop of Salzburg, and Archbishop of Arn as well as the Counts Helmogth, Rottecar, and Germar.

Leo and his Frankish entourage made their way back to Rome. Upon returning to the eternal city, an inquiry looked into the allegations of corruption and abuse against the Pope in November of 800. The Commission submitted their conclusion to Charlemagne who personally went to Rome. Their final verdict declared:

“We dare not pass judgment on the apostolic see which is the head of all God’s churches; it is all of us who are judged by it and its vicar; just as the custom was of old, it is judged by no one. But as the supreme pontiff has decreed it, we will obey according to the canons.”

The judgment of the commission prompted Pope Leo III, “the Vicar of Christ” to stand in the pulpit and cleared himself of all charges, stating:

“I have no knowledge of these false allegations which those Romans who wickedly persecuted me bring against me, and I know that I have not committed such crimes.”

The Pope’s declaration of innocence made the attack unjust and treasonous, thus, Charlemagne passed the sentence of death to Paschal and his conspirators. Leo, in an act of mercy, requested for the mitigation of the sentences of his opponents to exile, which Charlemagne conceded. 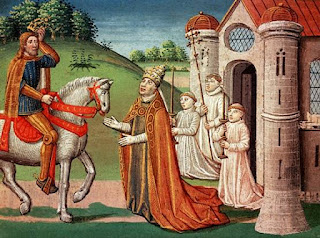 Birth of the Holy Roman Empire

The 799 Uprising against Leo concluded with exiles, the Pope then contemplated rewarding Charlemagne. His reward created a new political unit that influenced European politics for centuries. It began with a coronation on December 25, 800.

Pope Leo III displayed his gratitude to Charlemagne for his support and protection. On December 23, he purged the Frankish King’s sins. Then on Christmas day 800, as Charlemagne conferred to his son Louis the position of King of Italy, Leo suddenly honored and crowned Charlemagne as Imperator Romanus – Roman Emperor. Thus, began the tradition of the Pope having the authority to crown Holy Roman Emperors.

Several reasons laid as the root for the crowning of Holy Roman Emperor. The crowing benefited both Charlemagne and Leo III in particular and the papacy and the Frankish Empire in general. Charlemagne’s prestige and authority skyrocketed with the conferring of the title of Roman Emperor, while for Leo III it secured the military protection of the greatest power in the region. The title of Imperator Romanus culminated the close relation between Rome and the Frankish Empire.

The crowing of Charlemagne as Roman Emperor, however, made Leo apparently a junior in the partnership. He had no input or comments in Charlemagne’s decision to divide his Empire in 806. He also received no request for authority when Charlemagne directed the religious affairs within his realm. From 809 to 810, he faced Charlemagne opposition to his policy of appeasement towards the Eastern Roman Empire by refusing the chanting of the Filioque Clause that maintained the Holy Trinity which the Orthodox Church of Constantinople rejected. He took no part in Charlemagne’s decision in 813 to make his son Louis co-Emperor.

Moments of cooperation, nevertheless, existed between the 2 leaders. They both agreed to fight Adoptionism in Spain. They both agreed to the establishment of ecclesiastical organizations in Bavaria and Salzburg. They both supported King Eardulf’s restoration to the Northumbrian throne by condemning the Archbishop of York Eanbald.

On the other hand of his papacy, Pope Leo worked to improve the Papal State. He acted on Rome’s greatest challenges including the death of his protector Charlemagne. He continued to work well with the Frankish Empire until his demise in 816.

Pope Leo III’s secular role as head of the Papal State led to increased revenue from estates much credit to his previous role as treasurer. He faced several more challenges after the 799 Uprising, including an earthquake that shook Rome damaging several churches including St. Paul’s church. He then worked to repair the damages in the city and later on to other major centers including Ravenna. Then on the coast, the notorious Muslim pirates continued to ravage shipping and coastal villages along Europe’s Mediterranean coast. He along with Charlemagne combated piracy along the Italian coast, resulting in the recapture of Gaeta which the Muslim pirates managed to capture, as well as the rich and strategic islands of Corsica and Sardinia.

In 814, Leo’s Roman Emperor Charlemagne passed away. This automatically emboldened Leo’s enemies to plot against him again. This time, however, Leo spared no blood and abandoned all mercy towards his opponents, and quickly ordered their executions. When he faced a rebellion in Campagna, he crushed this with the support of the Duke of Spoleto. With regards to Charlemagne’s successor, Emperor Louis the Pious, he maintained a peaceful relationship until his passing on June 24, 816. Then in 1673, Pope Clement X, with the miraculous restoration of his eyes and tongue in 799 as the basis, canonized Leo III with June 12 as his feast day.

Pope Leo III rode a stellar rise as a Pope considering his election as a break from the tradition of Pontiffs coming from Roman nobility. His background became, however, a reason that erupted to violence that only failed thanks to the miraculous restoration of his eyes and tongue as well as the strength of his relationship with the Frankish ruler Charlemagne. Despite appearing as a junior in the partnership with Charles the Great, he set up a political relationship that influenced European politics for centuries, causing numerous historical events such as the Great Schism, the Investiture Controversy, the battle between Guelphs and Ghibellines that led to the exile from Florence of Dante Alighieri and the comically dubbed Bucket Wars between Modena and Bologna. Through his decision to crown Charlemagne as Roman Emperor, he made his mark in European history.

Eos: The goddess of dawn
Jan Zika and the Hussite wars